Why is my child barking? It could be croup!

If you’ve ever heard it, you will never forget it: the sound of a child with a croup cough, which has a very distinctive sound. Unfortunately, you’ll typically hear it in the middle of the night, so you are going to need to know what to do to alleviate your child’s symptoms when it happens.  But first…

Croup (or laryngotracheobronchitis) is when a child catches an infection of the upper airway that causes swelling of the vocal cords (the larynx) and windpipe (the trachea). This swelling narrows a child’s airway enough that it limits the air that can pass through it, causing a hoarse voice, a noise with each inhalation (called inspiratory stridor), and a harsh, sea-lion like cough, often described as “barky.” Think of a sea lion show at Sea World or in a movie, and you understand the sound. (Of note, seals are actually very quiet and it’s the sea lions that are noisy.) 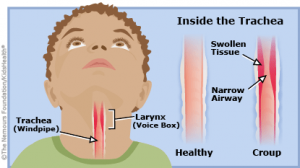 The swelling and inflammation that leads to croup symptoms (mentioned above) are typically caused by a viral infection, most commonlyParainfluenza, a family of respiratory viruses similar to the influenza viruses. However, croup can also be caused by the adenovirus, influenza,respiratory syncytial virus (RSV) and even measles.  Most often occurring during peak cold and flu season in fall and winter months, a child catches one of these viruses from exposure to respiratory droplets from the sneeze or cough of an infected person. These droplets can also live on surfaces like toys and desks, so when a child touches these surfaces and then touches his/her mouth, nose, or eyes without washing their hands first, they can become infected.

None of these viruses are childhood-specific illnesses, so why do they lead to croup in children? The answer is, it comes down to size. Kids ages 6 months to 3 years old are the most likely to have small airways, and croup symptoms from upper respiratory swelling from    a virus affecting those small airways.

What are the symptoms of croup (besides ‘barking’)?

The initial stages of croup will present like a typical cold. A fever may be present and children may develop a runny and/or stuffy nose. As inflammation increases, a cough will start and the classic symptoms of croup develop. These symptoms will persist until the inflammation decreases, and typically children will continue to have cold symptoms for the typical 7-10 days that most viruses last.

A word of caution, though. Parents frequently confuse the sound of stridor (a high-pitched noise made while breathing in) with wheezing (a high-pitched sound while breathing out). Though they both are distressing and sometimes loud, they are not the same.  Whooping cough is also a loud respiratory illness, but is not related to the Croup. That bacterial illness is characterized by a regular cough (no barking) and a loud noise, or whoop, at the end of a coughing spasm as a child struggles to clear infected lungs, and draw air into them.

Croup’s barking noise comes from a cough forcing air into a more narrow (upper) airway.  Wheezing, like we see in asthma, comes from forcing air out over a swollen and inflamed (lower) airway. I usually describe wheezing like this; imagine a balloon filled with air and you are pinching the opening and squeezing the balloon at the same time. That high-pitch whine the air makes as it comes out is similar to wheezing. Since croup is

from an inflamed upper airway, medications used for lower airway constriction and wheezing, like albuterol, will not work for it.

Symptoms of croup are frequently worse at night and can be exacerbated by crying. Furthermore, in a small percentage of children, swelling can be so severe that the child’s airway can become compromised. I urge you to call 911 immediately if your child is struggling to breath, is fatigued and/or is looking grey or blue.

What should I do if my child has croup?

Because croup is typically caused by viruses, antibiotics will not make the infection go away. Therefore, treatment for croup is mostly supportive, so first make an appointment with your child’s physician to make sure it is indeed croup!

Once it’s confirmed, keep your child calm and comfortable. Steam from a shower or humidifier helps soothe the airway and decrease the symptoms of croup. Cool air can also be helpful so walk your child outside. As stated above, symptoms are frequently worse at night so if you notice symptoms of croup before bedtime, sit in a steamy bathroom first and either crack a window in your child’s room or run a cool mist humidifier (never use a hot steam humidifier because of the risk of burns). For fever or discomfort, you can give your child acetaminophen (a medication like children’s Tylenol, but check the dosing with your pediatrician first).

Sometimes, the swelling gets so bad from croup that children will have stridor at rest, as opposed to just with coughing or crying.  In these cases an oral dose of a steroid or anti-inflammatory medication (like dexamethasone) can be given in your doctor’s office, which reduces the swelling in the airway, making it easier for your child to breathe. Children

who are really struggling to breathe and end up in the emergency room may receive a treatment with a nebulizer, a device that goes over their nose and mouth and helps them inhale racemic epinephrine.  Epinephrine relaxes the smooth muscle of the airway, making breathing more comfortable.  Children who receive a nebulized treatment of racemic epinephrine need to be observed for at least 3 hours following treatment to watch for a return of airway constriction.

Fortunately, even if a child had a rough start with the Croup, the good news is, they should recover from the most severe symptoms of it within the first 2-3 days, and the remaining running nose and cough should resolve within 7-10 days. 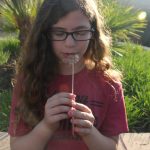 Spring is in the air, and so is pollenHealth & Fitness 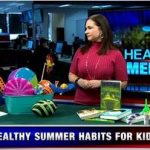